You are here: Home / Project reports / The town hall rally

On the 12 of October, our Town Hall Rally was held by the New Town Hall for 15 children from the hort of the Christian Primary School Dresden. The program was established by us with the support of Matthias Stresow of the Youth welfare office Dresden. The main stations were the atrium, the Golden Gate, the ceremonial and plenary halls and the office of the senior mayor. 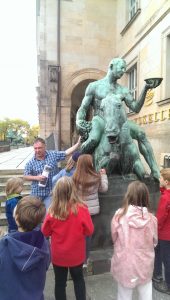 The tour started outside the town hall, where Matthias told the children much about the city wall that used to enclose Dresden, the Rubble woman and her significance for history, the monument “Bacchus on the donkey” and the so-called chocolate side of the town hall. Because of the lively narrative style of Matthias, the children were able to both listen to his stories with interest and learn a lot of new things about their hometown. 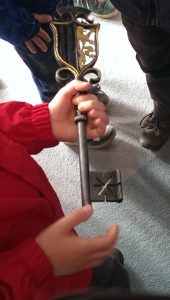 Then we went through the Golden Gate to the Town hall, where the children first looked at the sign in the foyer with the letters S P Q R symbolizing the Senate and the people of Rome. Then they saw the impressive staircase with the painted cupola. Then they were led through the plenary hall, the ceremonial hall and the mayor’s consulting room. In the first two rooms the children got explanations of the tasks of city council and city administration with their many departments. In the consultation room of the mayor, members of the protocol department showed the children the Golden book of the city, the Town hall key and the Chain of office.

At the end, the brochures with all the information of the excursion, in which the children could fill in the empty spaces and solve some riddles at home, were distributed. 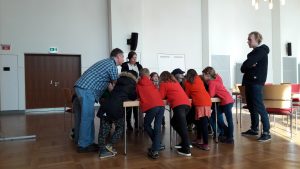 All in all it was a very informative event for all of us. Only for the youngest in the group (some were only 6 years old) the tour was a bit too long.

We would like to thank Matthias Stresow for the great excursion as well as the caretaker team around Mr. Gey and the protocol department for their dedicated cooperation.