You are here: Home / Project reports / Report from Lviv – Review of our Youth Exchange

After the long journey from Dresden to Lviv, we were welcomed at the main station by Diana Libert. Diana represented the Deutsche Jugend in der Ukraine (DJU), which is the partner organization of the Politischen Jugendring Dresden (PJR) for this meeting. After the travelers had a short rest, small introductory games began to get the participants to know each other. So everyone learned why the others participated and what hopes and desires were associated with the exchange. After that the supervisors presented the two organizations (PJR & DJU) in detail. The participants learned about the focuses and activities of both organizations in their work and what activities and offers (apart from the Youth Exchange) were and are still offered.

The start of the content-related work and the accompaniment of the cultural evening, as well as a part of the team building workshop, were prepared and carried out by Eric Eberle, who was employed at the Goethe Institute in Ukraine at the time of the Youth Exchange. Using interactive methods, group formation and researching tasks, the participants explored the topics: political parties, political system and political actors. After the presentations of the two countries the participants stasted working in new groups  with the maps of continents, on which they had to mark the status of different basic and liberty rights in the different countries with different colors. The result was based on the Bertelsmann Transformation Index and the Freedom House Index. 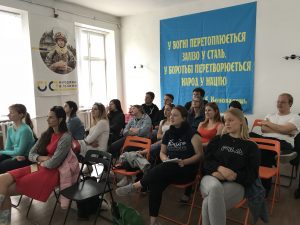 Diana Libert and Anna Rabzun, the second supervisor from the DJU, gave on the next day a lecture about the state of civic engagement in the Ukraine. Subsequently, Franz Beensen developed the topic with an input lecture on civic engagement in Germany. The basis for this was the Allensbach-Study on volunteering, which was completed in 2014 on behalf of the Ministry of Family Affairs. The result was that civic engagement in Ukraine is not as pronounced as in Germany. In the chair circle possible reasons for it were named and discussed: the sociocultural character, material conditions and social structure, the history, etc.

From word to action

Now it was also time to change something and not to be content with the partly predictable problem analysis. That’s why Diana gave a project management workshop in the premises of the DJU in Lviv, during which the participants had to formulate their ideas and develop strategies to implement them. In doing so, she placed special emphasis on the connection between self-responsibility for oneself and responsibility for society as a whole, which she described not as a contradiction, in the sense of an either-or, but as a continuum, so that out of commitment to one’s own personal development also commitment to the citizenship of each country can grow. 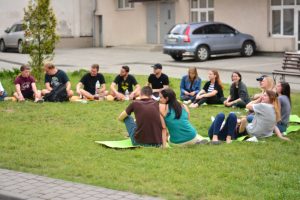 Another workshop by an external trainer focused on the topic  of gender equality.  Women in Ukraine are very responsible in all areas and are generally more active than men. However, almost half of the Ukrainian population does not regard domestic violence as violence and women are structurally repressed. The conductor of  the course tried to raise the awareness for it. For this he first collected common (gender) stereotypes and then deconstructed them. Age, gender, height and aptitude were thus exposed as relative, context-dependent standards of evaluation. The conclusion was a group game under the open sky, in which, according to the scissors-stone-paper principle, the participants in groups competed against each other. Scissors-stone-paper (in this case: dragon, samurai and princess) had to be displayed performatively. Although the dragon defeated the petite princess, she also beat the masculine samurai (who in his turn defeated the dragon). So the workshop came to a successful conclusion. In the evening there were many controversial, but friendly and constructive discussions about gender equality and subsequent topics, e.g. gendered language. 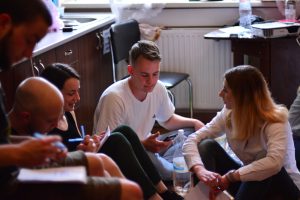 Due to the fact that civic engagement in Ukraine is not particularly strong, the number of NGOs that can be visited is limited and many are only under construction since the Maidan protests. In addition, there is a lack of reliable financing. Thanks to Diana’s tireless efforts, we were able to visit some of them and to carry out discussions.

So we were at the Lviv Youth Center. It has set itself the task to renovate a room on its own and to provide it to the citizens of Lviv. It was founded during the Maidan protests. The representative reported extensively on the major structural problems of financing, corruption, bureaucracy and political instability. At the same time, he was very positive about further development and highly motivated. Meanwhile, the rooms of the organization are used by various associations, the only criterion is the impartiality of events held in the rooms. Chess tournaments, language courses, dance competitions and youth exchanges take place there. In perspective, the building is to be expanded. Attempts are being made to install or refurbish sanitary facilities, bedrooms and more. 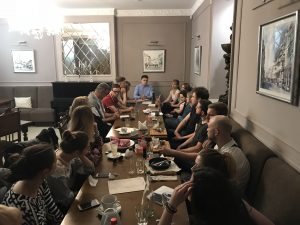 The second organization is a spin-off of a student council, more specifically a group of students who wanted to be engaged not only in higher education policy. It does not have any premises yet and mainly organizes itself digitally. The students provide materials for events, raise money for the welfare, help with the construction / dismantling of charitable events and constantly recruit new members. By now they are well known in Lviv and their next goal is to get permanent space.

The cultural program included a city tour and a trip to the surroundings of Lviv on the last day before departure. Many contacts were made, both between the participants, who are very much looking forward to the part in Leipzig, and between the organizations we visited and organizations in Germany represented by our participants. For example, many German participants were involved in student self-administration and have networked with the student organization in Ukraine to support them.

Finally, it is still to match the goals we set with the actual progress we made. The intercultural competence of the participants has increased according to our estimation, the participants showed great interest to the culture of the countries of the partner organizations. Knowledge about geography, politics, society, gender relations and the life of the youth in the partner countries has grown. Basic knowledge of Ukrainian was imparted in the framework of various language exercises. The Ukrainian participants very much appreciated the openness and patience of the German participants while using their German language skills. 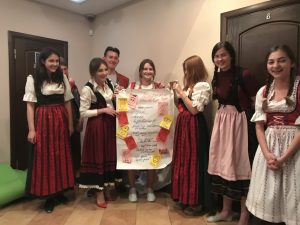 The Ukrainian participants got to know important political actors and parties in Germany. Apart from that, friendships were developed, through which it will be actively communicatedn on the topics of sport, fashion and (pop) culture, above all via social networks. Clichés and stereotypes were purposefully collected and refuted by the common cultural evening. The Germans became acquainted with Ukraine as a homogeneous multi-ethnic state with a wide variety of ethnicities and traditions. The Ukrainians learned that Bayern (Lederhosen, Dirndl, Oktoberfest) can not be equated with the whole Germany. Through the task of presenting a practical project, the engagement with the theme of the meeting for the period between the part in Lviv and Leipzig is guaranteed. In Leipzig, the various practical projects will be sorted by topic and, with the help of a think tank and a market of possibilities, follow-up projects will be initiated. Motivated by the Youth Exchange, three German participants were mobilized for the Student Council elections in Leipzig. Organizations with a best-practice nature must increasingly be visited in Leipzig, but unfortunately there are not many in the Ukraine because of the very different political and socio-economic situation and the difficulties associated with them.

The project is funded by the City of Dresden (Youth Office), the Free State of Saxony (Saxon State Chancellery, “Interregional and cross-border Cooperation”) and the Federal Foreign Office / Federal Government (“Strengthening cooperation with civil society in the countries of the eastern partnership and Russia” ).