You are here: Home / Project reports / Vivid history of the city – tablet tours as part of the Jugendweihe (Youth consecration)

As part of the Jugendweihe (Youth consecration) we have recently performed several Actionbound tours through Dresden. With the tablet-based city tours and 6-12 years old participants we followed the traces of the Peaceful Revolution in the inner city and the fate of the Jews during the Nazi era in Dresden-Plauen. 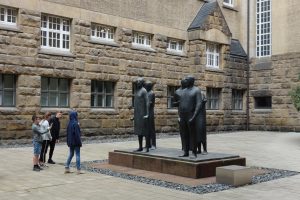 The inner city tour started at the place where the trains with the Prague embassy refugees drove through Dresden in 1989: Dresden Central Station. Even today, a small memorial plaque on the facade of the station commemorates the request for freedom and following start of the revolution, which  finally led to the unification of the two German states in 1990. On the way from the Central station to the Kreuzkirche and finally to the Kulturpalast, we also talked about the Group of 20, the Ministry of State Security (Stasi), the food situation and much more. 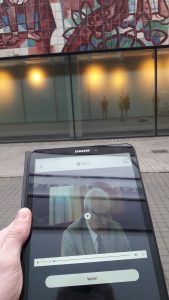 The stumbling stones tour in Dresden Plauen started in our office. After a small introductory talk about national socialism and persecuted groups, we finally set off to learn more about the biography and fate of Jewish and disabled people while standing near some of  their stumbling stones. In this context, we also talked about euthanasia, the persecution of the Jews, the concentration and extermination camps, and about the destruction of Dresden. The conclusion took place in the courtyard of the former “Royal State Court” at Münchner Platz, where many resistance fighters of the Nazi era were executed. 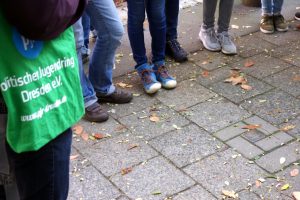 Despite the partly rainy weather with low temperatures, the participants showed great interest and also emotion in stories of fateful events and biographies. 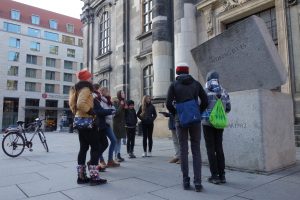 My very busy springReview of our commemoration trip to Lidice