You are here: Home / Blog / Becoming a native in Dresden

The first three months of my EVS project are almost over and so much has happened to me that I really want to share it with you. 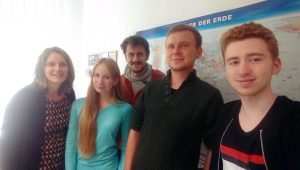 First of all, I´d like to say that I work with unbelievably friendly people, who I can consult for all my questions. Thanks to them, I quickly became accustomed to my life abroad: decorated my room, found an opportunity to continue doing sports, made new friends and also discovered some leisure activities.

Already in September after 2 weeks in Germany, I had my on-arrival training, which lasted 7 days and took place in Weimar. I took part in various activities with 19 other EVS volunteers and also learned a lot about the European Voluntary Service and the city itself. One day was excursion day and I visited the Buchenwald concentration camp, which is located near Weimar. This week I had a lot of fun and I also visited one volunteer after that in October in Leipzig.

There was also a lot to do in our office. In October our Town hall rally for elementary school children took place, then a Stumbling stones tour for eighth graders and then my Russian evening for PJR volunteers and staff. The rally was prepared and carried out in cooperation of Franzi from the office and Matthias from the Jugendamt der Stadt Dresden. I was only supposed to take pictures and had the perfect opportunity to learn some new facts about the history of Dresden. 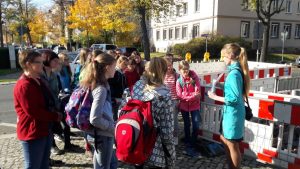 For the Stumbling stones tour, Tobias, our FSJ volunteer Clemens and I have selected 7 stumbling stones and told the young people the sad biographies of persecuted Jews. I was a little bit scared of the event, when I had to act as a kind of tour guide, but everything went well and I was very happy.

The most complicated thing for me so far was the Russian evening. For this I´ve made a presentation about my city and selected a video to show all these to the team of the PJR. I made an effort during the preparation and all the spectators were satisfied afterwards. 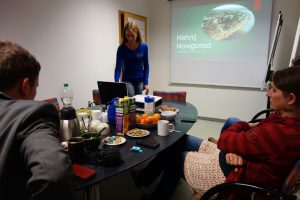 In November, I took part in the Actionbound tour of the former FSJ volunteer Charlotte with the topic “The history of Dresden“. With tablets we went through the city center, got lots of new information and were also supposed to answer questions. It was very interesting for me, I am also considering making an interactive tour with the app.

And last but not least, with Tobias we went to the sixth grade of a high school almost every Thursday for two months to do social training and introduce the class council. At the same time some of my ideas of social games could be carried out and in the end I learned what the class council is all about. I’ve never heard of anything like this in my city, so that was particularly educational for me.

“In the distance – at home? Minorities and refugees in Europe ” – ge.-pol.-ukr. exchange 2017The town hall rally