You are here: Home / Blog / To overwinter in Germany

my first european winter is over and I would like to share with you how I spent it. 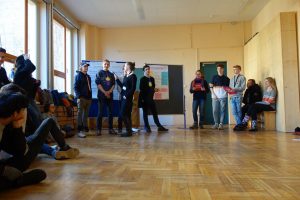 In December, I was carrying out some “Social media” workshops with the PJR team, and I also learned something for me about how to use social networks. But the highlight was our modulation of local politics game: students of the 10th grade of the Waldorfschule were divided into four parties and discussed in the form of a city council on the construction of a new refugees asylum in Dresden. I was responsible for the journalists who conducted the interviews, collected information and created a press wall. It was a lot of fun and I learned practically how the city council works. 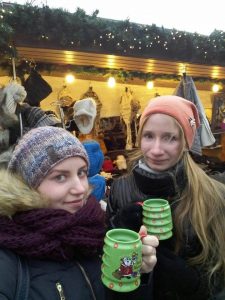 In my free time I stayed in Dresden almost all the time because here took place an event that you should not miss – Christmas market! In the heart of the city, on the Altmarkt square, the oldest and most beautiful Christmas market in Germany – the Striezelmarkt is located, which has been existing for almost 600 years. I often visited it with my friends, tasted mulled wine and also learned a lot about Dresden traditions, such as the Stollen and the Plaumentoffel creation.

New Year’s Eve and the beginning of January I spent at home with my family and friends, who I had missed a lot before that. Afterwards in the office it was relatively quiet and there were not so many events, but I participated in the film night “Shoah” (“holocaust” in Hebrew) by our FSJ volunteer Clemens. The film episodes he showed were impressive and made me think a lot after that. 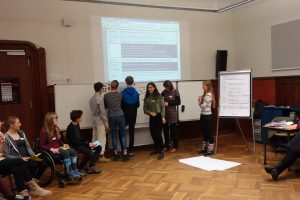 In February, we started again with the “Social media” seminars, and we also prepared and carried out the organization meeting for the German-Israeli exchange. My main task was to make a get-to-know game with the pupils. The game went well and I was very happy. 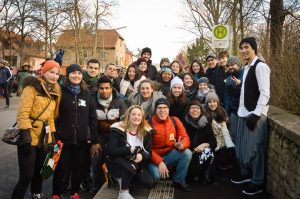 In the middle of the month, I spent 5 days in Würzburg during my EVS midterm meeting seminar. There I met 17 other volunteers, shared experiences from my project, played many social interaction games, learned about YouthPass – the document that all volunteers get at the end of their projects – and learned more about EVS and saw a carnival for the first time in my life. So, I can say that I´ve spent the time there meaningfully. 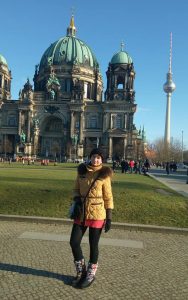 February I also call “the month of the two capitals” because I visited Berlin again and for the first time – Paris. In Berlin I finally got the opportunity to go to my favourite cathedral in the world – Berlin Cathedral – and in Paris I was able to fulfil my teenage dream and see the Eiffel Tower in reality.

During the last two weeks I was also busy preparing for the event that took place the day before yesterday: the lecture “Presidential election in Russia 2018”. For that our intern Martin and I have prepared a presentation. 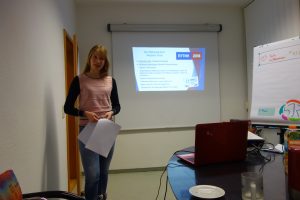 In my part, I reported on the electoral procedure, previous elections, the candidates and their programs and the opposition, and then Martin supported me in his assessment of how democratic this election is. At the end our listeners asked many questions and the result was a fruitful discussion.

Review of our commemoration trip to LidiceOut and about in Web 2.0