You are here: Home / Project reports / Review of our commemoration trip to Lidice

On Saturday,  the 24th of March, we organized a memorial tour to Lidice as part of the International Day for the Elimination of Racial Discrimination. This is the place that was razed to the ground in June 1942 as an act of revenge for the assassination of the head of the Reich Main Security Office Reinhard Heydrich. At the same time more than a half of 500 inhabitants of the village were killed. After the war, the village was rebuilt 300 meters away.

On this trip we wanted to find out what the life  of  the village today looks like with this historical background. For that purpose, we spent 6 hours in Lidice. We started getting acquainted with the place with a tour in the piety area – the area where the village once stood. There, with the help of a guide, we observed the foundations of the old church, the school, the Grave of the Lidice men, the Memorial of children’ war victims and the Rose garden. 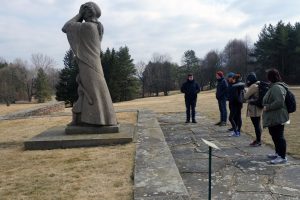 With the first impressions of the tragedy that occurred here, we went to the museum and visited the permanent exhibition, as well as a film with eyewitness interviews.  Later, after the lunch break, we visited the exhibition “We are building a new Lidice” in the family house №116. The family house №116 is one of the original houses that were built as part of the development of the new Lidice after 1945. The authentic furniture of that time made for a very cozy atmosphere. 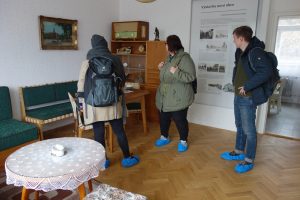 The last stop of our tour was the Lidice Gallery, where we visited the modern art exhibition “Remember Lidice”. It consists of gifts to Lidice by artists from all over the world and the photographic project “My home – witness of portraits”. We also watched a short documentary film about the outbreak of the war, the assassination of Heydrich, the burning of Lidice, the end of World War II and the subsequent return of women to Lidice from concentration camp.

In the end the participants shared with us their impressions of the visit, got small gifts from us and we started our way back.